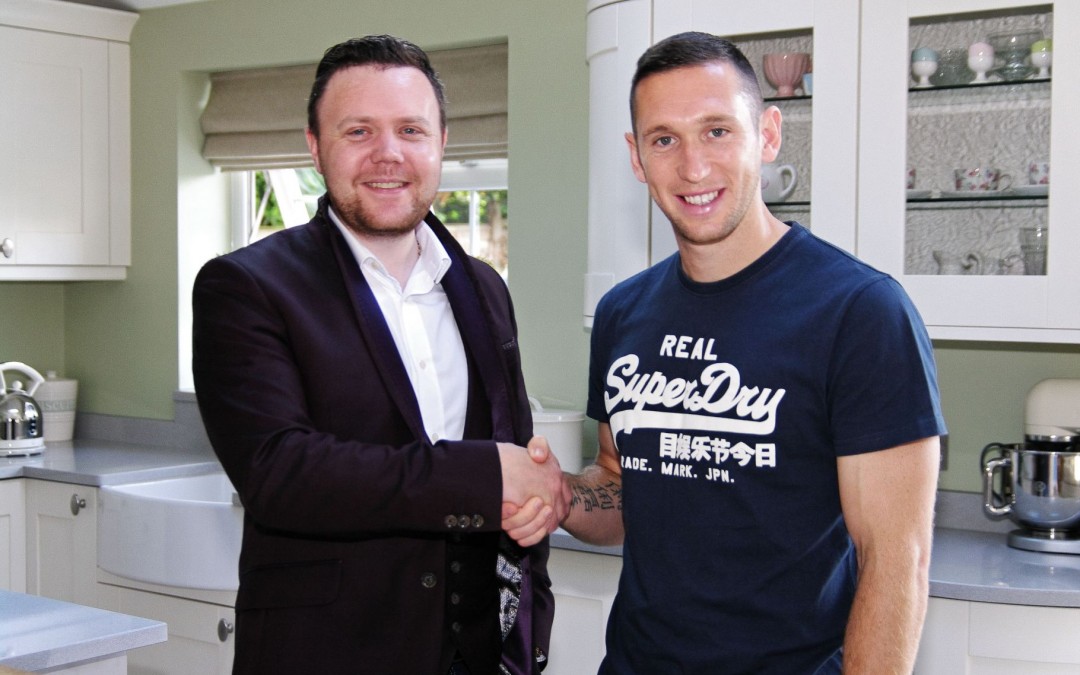 Andy Croft: Mid-fielder currently with Brighton & Hove Albion
Tore part of cruciate ligament in his knew in a game against Watford in October and will miss the rest of his season, but his contract has been extended for another year. He trained as a youth with Chelsea between 1994 and 2000, when he joined Gillingham. He was loaned to Peterborough and Wrexham and joined Norwich City in 2010, returning to Brighton & Hove Albion in 2012. He has also played for the Welsh international team, with 45 appearances in total, including Under-19s and Under-21s. He scored a total of 19 goals for Gillingham, racking up 170 appearances. He also captained the club in 2007/8. He has so far scored six goals for the Seagulls.

How did your new kitchen come about?
There was a kitchen when we moved here, but basically we gutted the whole house – it was like an empty shell. It was like having a brand new house, even though it is around 30 years old. The kitchen was small for what we wanted. We extended the house at the back and out over the garage. So we nearly doubled the size: when we bought it the house was 1,700 sq ft now it’s around 3,000 sq ft.

How did you find PTC Kitchens?
They were recommended by the building contractors who did the whole project and who do a lot of work with PTC. We went to see him at his impressive showroom in Rochester and straightaway we could see he was miles above the others we had gone to in terms of quality of service. He could understand exactly what our tastes were and what we wanted. Sarah spent a lot more time speaking to Paul than I did, to be fair.  She loved Paul’s ideas. It was a no-brainer.

What did you want the kitchen to be? Just a kitchen? Somewhere to entertain? A family area?
We wanted it to be everything. We wanted it to have the wow factor, for people to walk in and say ‘what a lovely kitchen!’. To be practical – with all the storage we needed. All the mod cons – and an open-plan area where we can see the kids playing and see the garden. It needed to tick all those boxes and we feel Paul has achieved that.

Where there any special items you wanted to be included?
We’d always wanted an American style fridge-freezer and a range cooker. We wanted the utility room close to the kitchen, somewhere to do the laundry and with a door so we could shut it all away. And yet be close by – in our old house it was outside.

You decided not to go for high-gloss white ultra-contemporary?
We like to mix the two – half and half, bright airy modern but with a traditional feel to it. We wanted a cashmere and cream colour and sage green splashback with sparkly bits and the woodgrain in the doors – it’s a bit more inviting, not too clinical.  Yet the granite worktops give it a modern touch but are practical.

Were PTC helpful in showing you and Sarah all of the options available?
To be fair the experience was brilliant. Sarah had a bit more of a say as she cooks more than I do. Paul showed us how it would All look on his big-screen TV and he drew up his plans all to scale from the architect’s drawings so he included the big family area in his plans too as well as the kitchen – even though he wasn’t doing that area. With the 3D drawings we could really see what it was going to look like before we went ahead. He was really patient and easy to work with, we never felt rushed and we never felt that it was just another job for him. He took time and he took pride and wanted to do the best he could. Everything about PTC was first class in terms of pre-sales and after-sales service.

How long did it take?
We had it designed way ahead of the building work, but once PTC got in, it was about six weeks. It was one of the last things to go into the house. We felt like it was a brand new house after all the work. We had it exactly as we wanted it. We’ve been in here now five or six months and we wouldn’t change anything. We’ve lived in quite a few houses, we’ve had to move around a bit, and so we knew what we wanted this time. His fitters were brilliant. They worked tirelessly. They were always grafting. Their end finish and quality was first class. There were no real problems but we knew that we’d only have to pick up the phone and Paul would sort any problems.

What are your favourite things about the kitchen?
The American fridge-freezer and range cooker. But it looks very neat as the big fridge-freezer is hidden behind a cupboard door.  The colours – the cashmere and cream and the granite worktops go really well with the rest of the house. Love the colour and the twinkly bits. We also love the island and the family is using it all the time. It has the electric pop-up socket for your iPads and there’s the under-cupboard lighting and the soft-close doors. The pull-out baskets are nice. 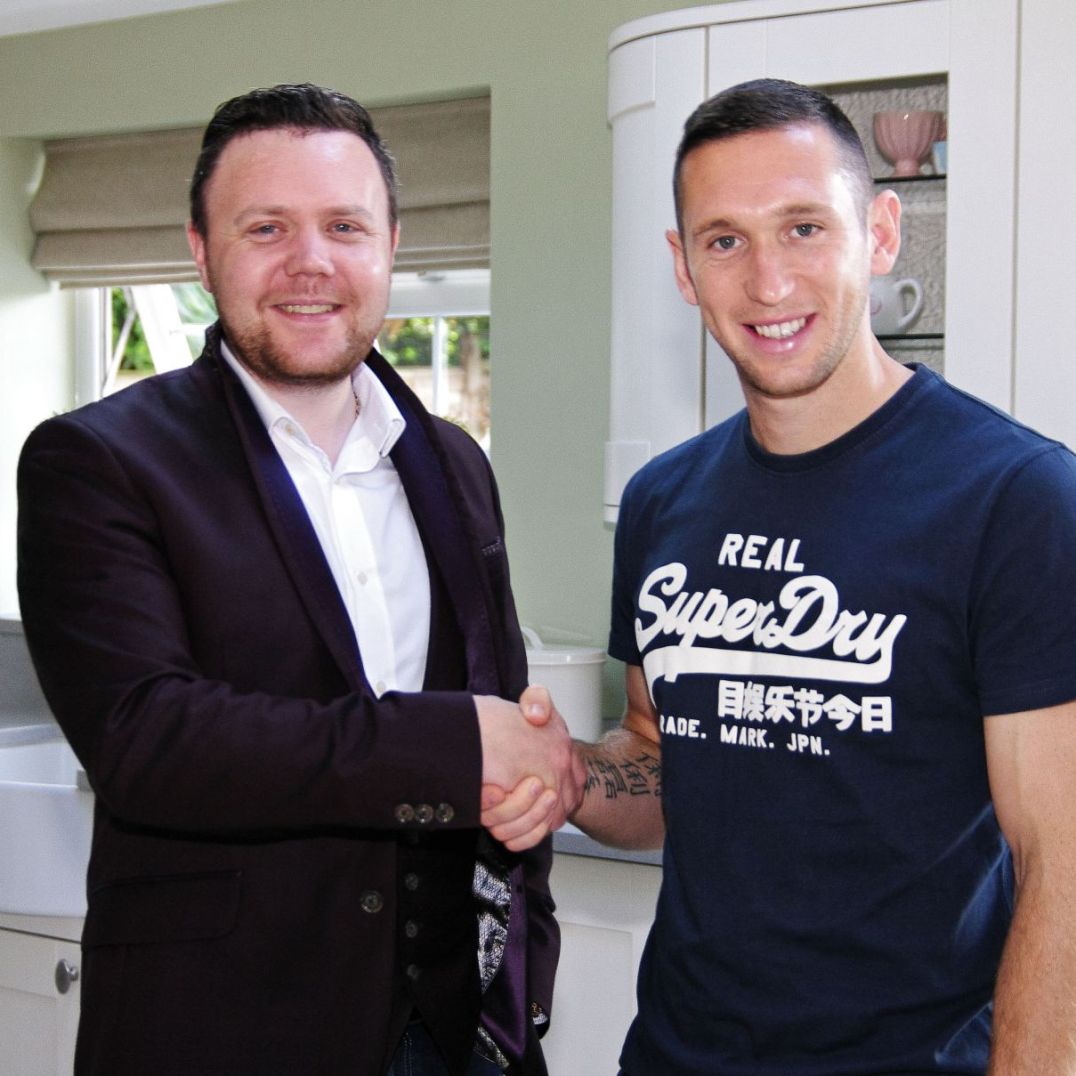 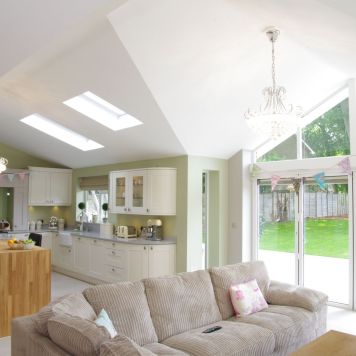 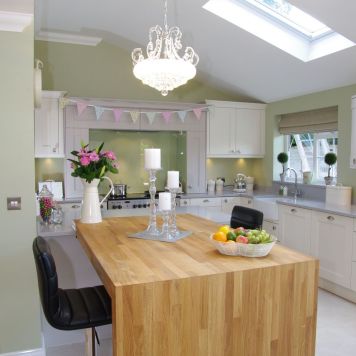 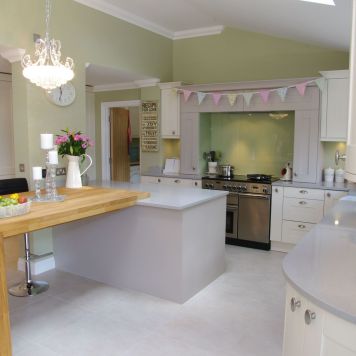 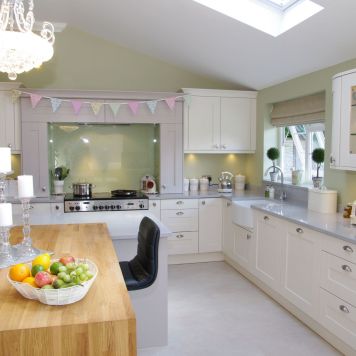 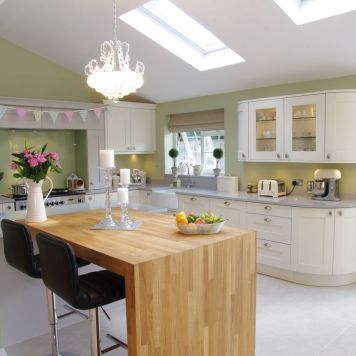 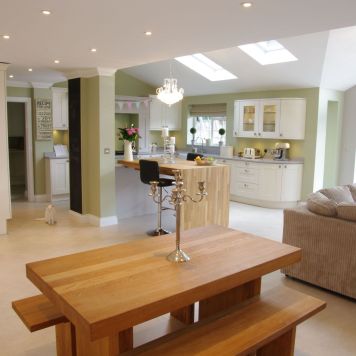 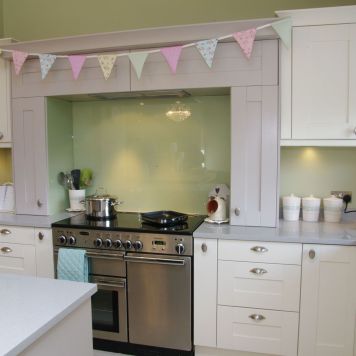 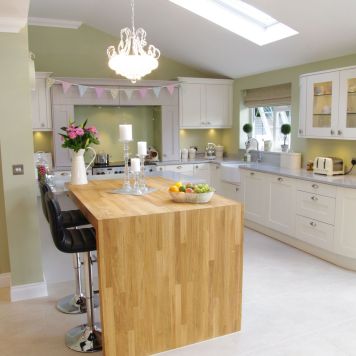 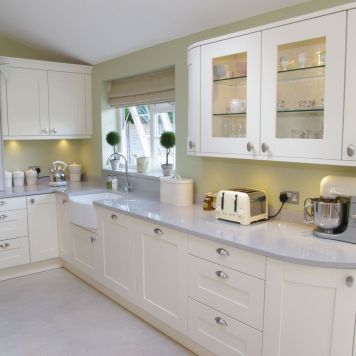