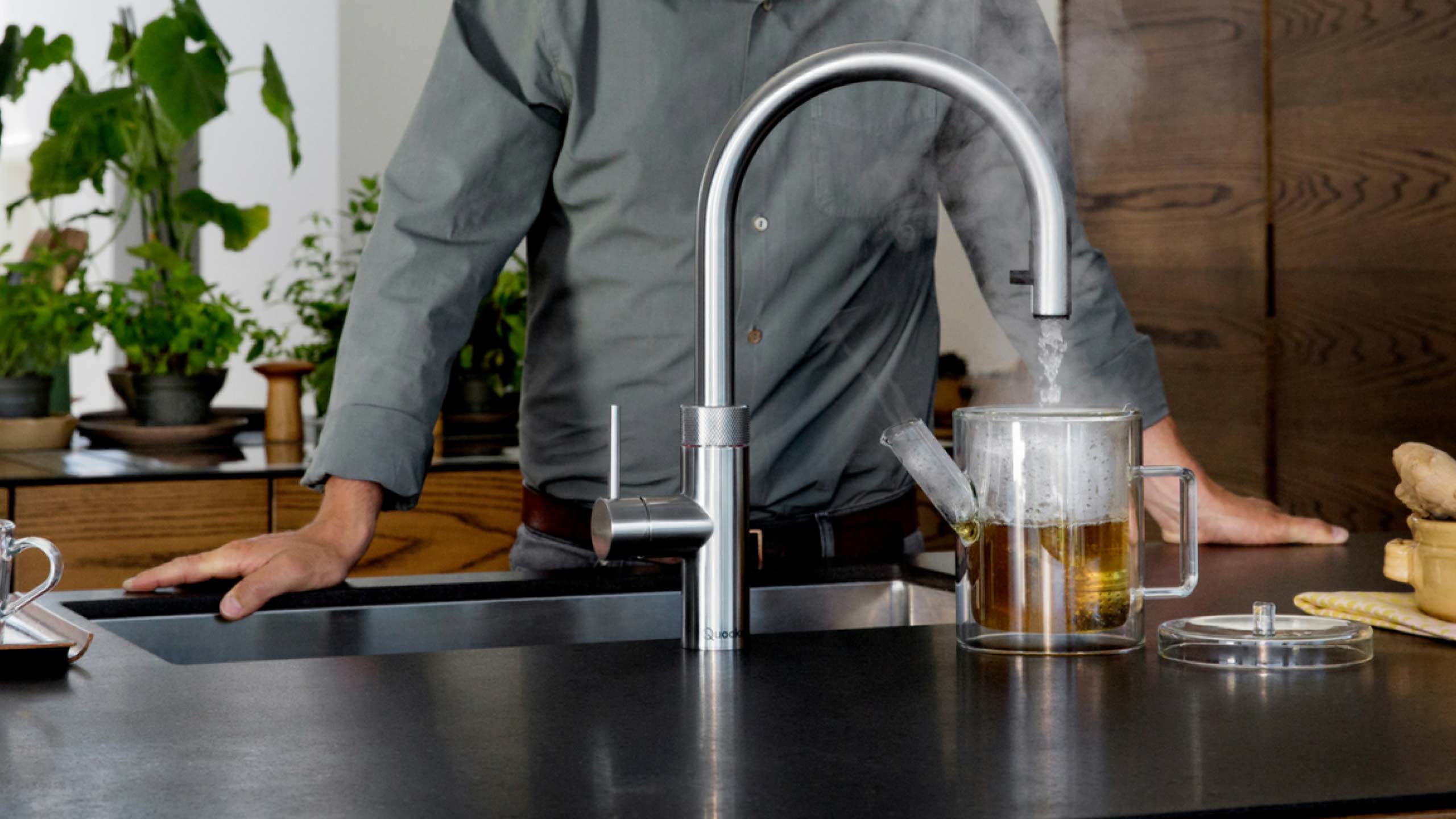 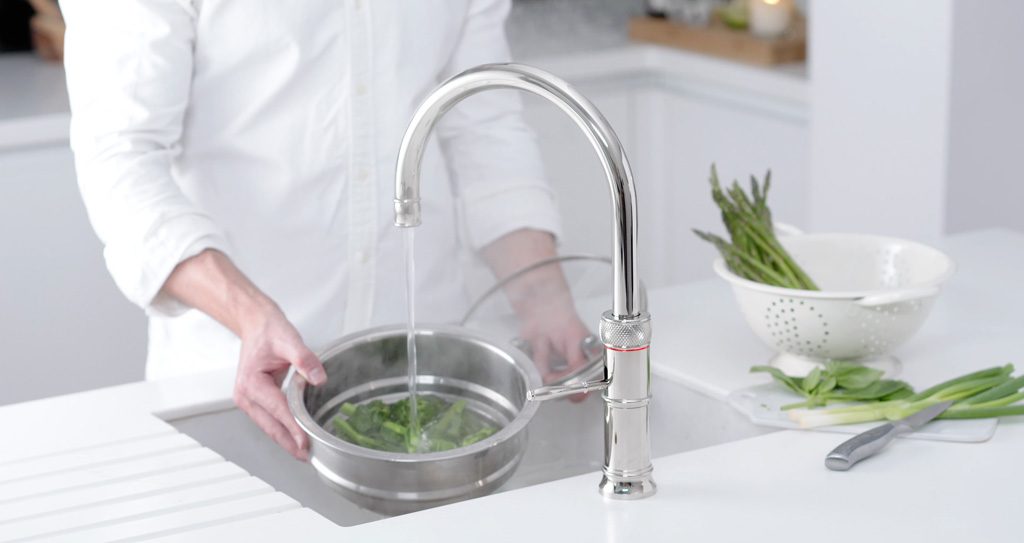 Anyone who needs boiling water several times a day will not use more energy with a Quooker than with a kettle. The secret is tucked under the sink.

A Quooker consists of two parts: a boiling-water tap on top of the worktop and a small tank under it, in which the water is stored at a temperature of 110ºC. This tank is a kind of thermos flask that’s connected to the water mains. Thanks to the high-vacuum insulation, the heat can’t escape. That means that only very little energy (10 watts) is required to keep the water in the tank at boiling point. When you pour boiling water from the tap, fresh water immediately runs into the tank under the worktop. So all you have to do is top up the tank and reheat what you’ve effectively used.

The safest choice for every household.

imagine for a second that you are holding your hands under the flow of boiling water. You’d pull your hands back before you get badly burned because the boiling-water flow, while hot, is a not solid stream of water. It is made of fine drops; a huge difference to the solid jet of water that will hit you if the kettle falls over. That could cause serious burns in a single instant.

To further decrease the risk of burns, the Quooker taps are equipped with a couple of subtle features. For example, they have a rotatable spout that you can aim precisely, for example when you are filling a jug or a pan. The spout is well insulated in all models, meaning that you won’t run the risk of burning yourself after operating the Quooker.

A sophisticated safety system ensures that a Quooker will never automatically dispense boiling water. You first have to press the handle twice and then turn it. It is only then that boiling water flows from the tap. This system has been extensively tested. The complex press-turn movement means that the risk of ‘accidentally’ turning the boiling-water tap on is very small.

The new Scale Control Plus

The new Scale Control Plus* is smaller in size and volume. This makes installation easier, especially in cases where a Quooker and a CUBE are installed. In areas where water is average-high hardness, 700L of water will be completely descaled with one cartridge. Depending on the hardness of the water, this may be more or less.
As the new Scale Control Plus does not have a bypass, all water is completely descaled until the filter has reached the end of its capacity. When expended, the cartridges are easily replaced by turning the old cartridge 90° counter clockwise to loosen, and 90° clockwise to tighten. 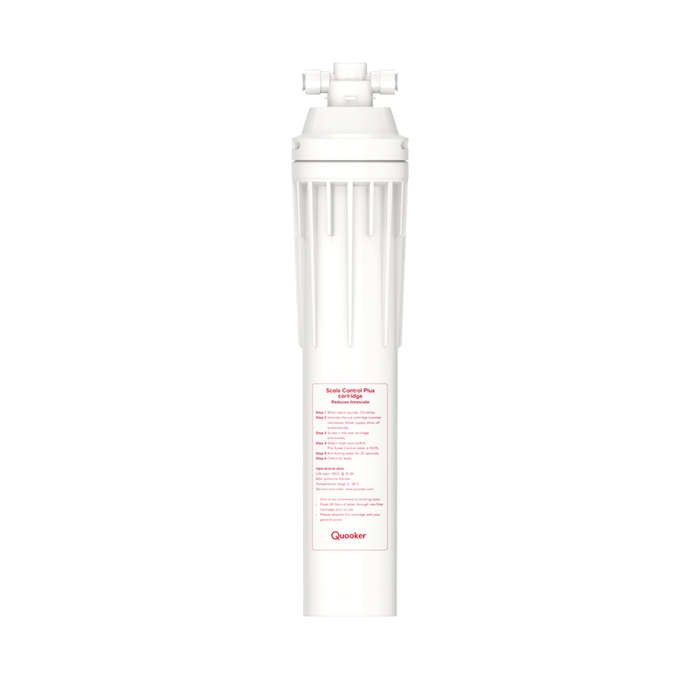 The Quooker Cube. The Tap that does it all.

With the new CUBE, you can now also dispense sparkling and chilled water from the Quooker tap. The tap that does it all. The new function makes life in the kitchen even easier. It saves you time and space, it means you no longer need to use plastic bottles and it is completely safe. To dispense sparkling water, press and turn at the same time. The illuminated ring that turns red to indicate boiling water now flashes blue: sparkling water comes out of the tap. And if you hold down the button for slightly longer and then turn it, you get filtered water. So it’s impossible to dispense boiling water when you want sparkling water.

The CUBE can be installed at the bottom of the kitchen cabinet next to the Quooker tank. It includes two filters that make the water just as pure as the bottled water you buy in the shop. The CUBE is attached to a CO2 cylinder that gives you 60 litres of sparkling water from your Quooker tap.

The CUBE supplies sparkling and chilled water and means you no longer have to buy water in plastic bottles. To obtain sparkling water, a Quooker CO2 cylinder must be connected to the CUBE.

The Flex is the only Quooker tap with a handy, flexible pull out hose. Dispenses 100°C boiling, hot and cold water. The boiling water stop ensures that the Flex can never dispense boiling water when the pull out hose is pulled out.
Finishes available: Polished Chrome, Stainless Steel, Black.

Quooker’s Twintaps, our matching boiling-water and mixer taps, are both practical and stylish. The boiling-water tap is height-adjustable.
The Nordic boiling water taps from our Twintaps series are also available separately for combining with your existing mixer tap.
Finishes available: Polished Chrome, Stainless Steel. 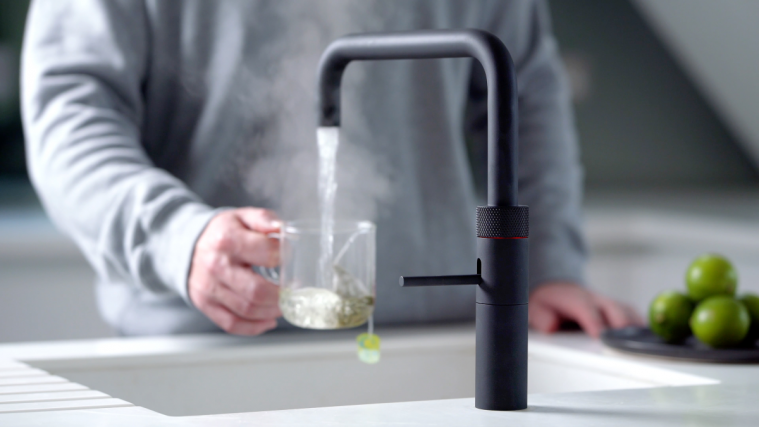 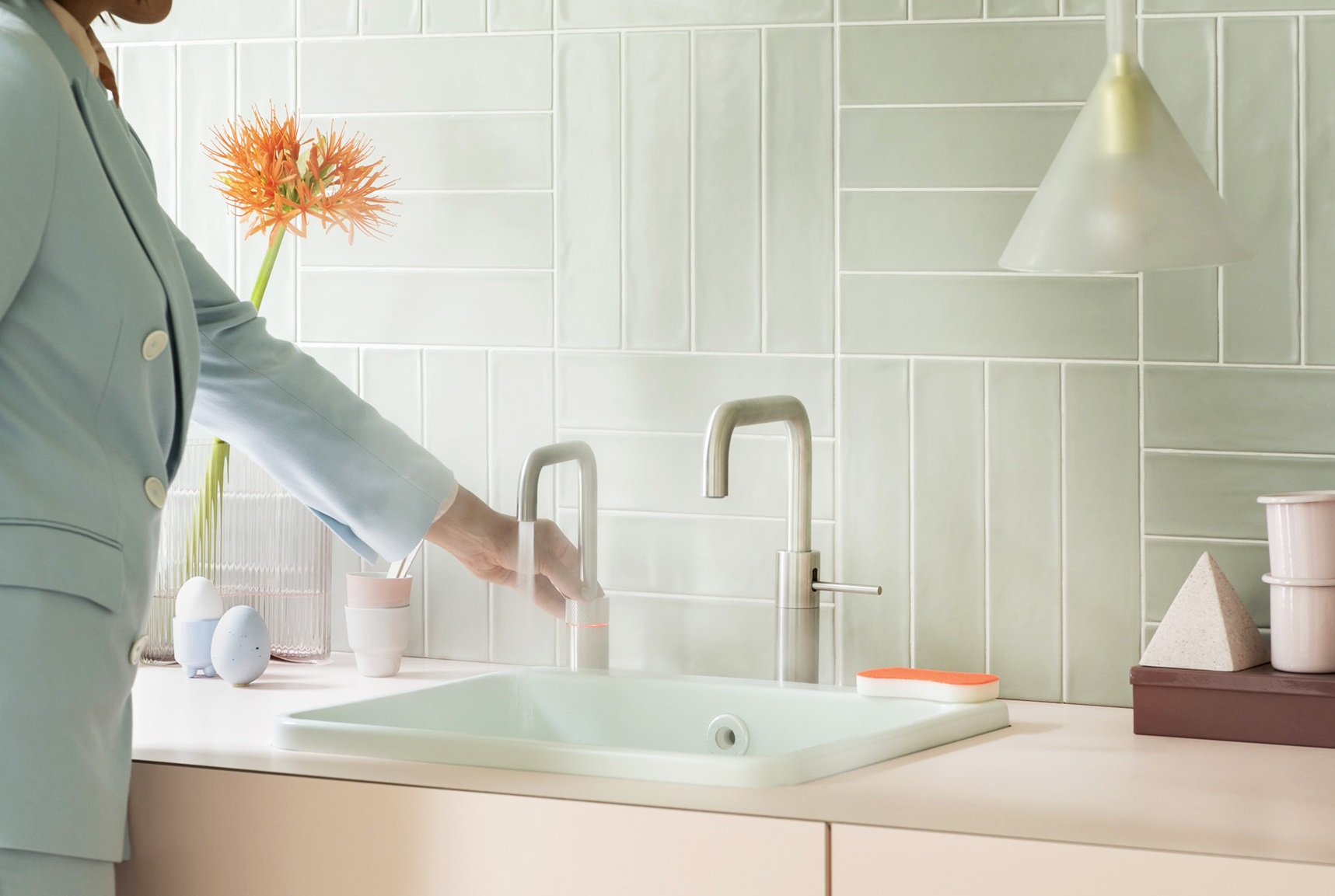 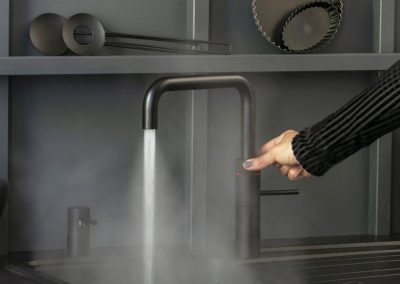 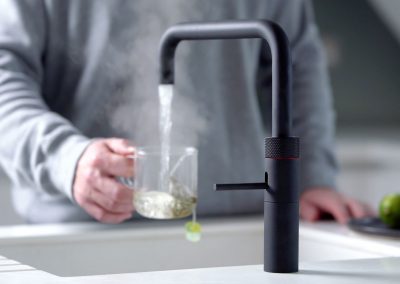 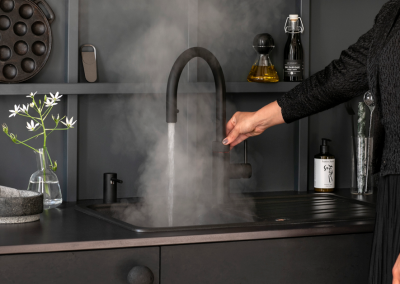 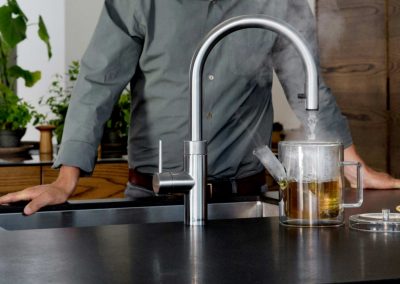 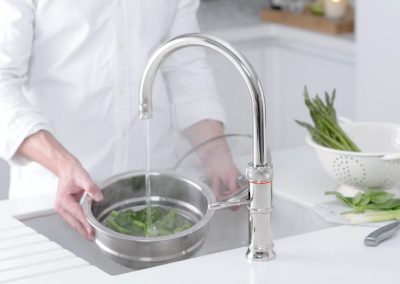 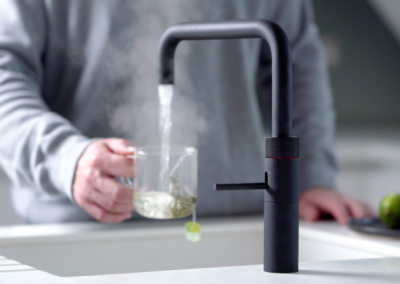 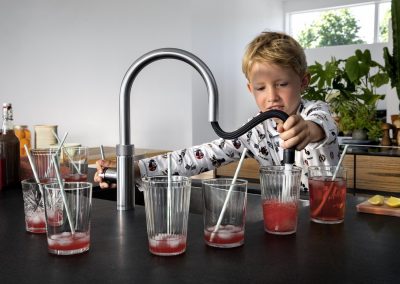 How much does a Quooker cost?

Quooker taps have many options, the starting point for a Quooker tap is £950

I like my tea hot, will the Quooker be as hot as my kettle?

Quooker is the world’s only true 100°C boiling water tap and as a consequence it is the only tap on the market that truly allows you to be rid of the energy-greedy kettle.

Competitors can only reach a maximum of 98°c because of patents Quooker hold.

What does the Quooker cube do?

Can the Quooker cube be fitted to my existing Quooker tap?

Is a Quooker Tap expensive to run?

The running costs are approximately 3 pence per day.

Is the water fresh if it is stored in a tank all day?

The stainless steel tank with revolutionary patented vacuum insulation and thermos technology holds water under pressure (so it does not boil) at 108°C. Therefore it ensures that every delivery
is fresh, sterile and removes the risk of harmful bacteria such as legionella.

Where can I buy Quooker filters and accessories?

You can get very competitive pricing from us at PTC kitchens.

Please call or email to make an enquiry.

What size Quooker tank should I get

80% of Quooker sales are of the PRO3 model. This has a capacity of 3 litres and will provide 3 litres on demand.

Which Quooker tap should I buy?

Quooker have many options from a stand alone boiling tap to a tap that does boiling, hot, cold, filtered and sparkling. Contact us to discuss what option would work best for you.